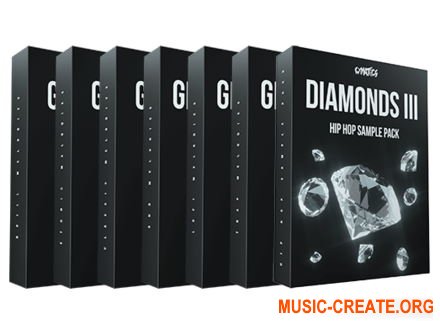 
DIAMONDS III - Hip Hop Sample Pack
Diamonds Volumes 1 & 2 were some of the highest selling packs we’ve ever released, and ever since we’ve had tons of producers asking us to release another installment! This time around, we took what we’ve learned from the original Diamonds packs and we put together this new ultimate version for Hip-Hop producers.

This premium library of samples includes industry level drum one shots, heavy hitting 808s, crisp snares, drum loops and more! We wanted to make sure that Diamonds Vol. III had everything you would need to make a hit record with one pack alone.

GEMS VOL. 7 - Drill Melodies
There's no question that drill music is one of the most popular rising sub genres of the last decade.

With big producers like Young Chop, 808Melo, and TM88 producing big hits, drill music has a very unique and dark sound that encompasses the life of each city it comes from.

Our production team put together this collection of gritty and bouncy melodies that pair perfectly with heavy 808’s and hard hitting drums.

Whether it’s latin style guitars or asian style flutes, there’s no doubt that there is a huge wave moving with this sound...

Our team created together a variety of different ethnic loops to give your tracks a unique vibe. Not to mention, with each loop included stems & midi, you have full creative control to take the loops in whatever direction you’d like.

We tried to keep the vibe and style of the classic hip-hop sound, but without having to sample a record to achieve it.

The melodies in our classic collection pair perfectly with heavy swinging and off the grid drums, capturing that classic feel of old school hip-hop. Our team wanted to come as close as you can get to crate digging for this one, without the headache of sample clearance!

GEMS VOL. 10 - RNB Melodies
RNB has always been one of the most popular sub genres of the game, with huge artists like The Weeknd, Tory Lanez, and Trey Songz dominating the charts.

The genre of RNB merges perfectly with many different genres such as pop, blues, hip-hop, and even trap music. From emotional chord progressions with soulful influence to harmonic vocal pads that bring it all together...

This collection of beautifully composed samples has exactly what you need to create your next big RNB record!

Some of the biggest artists of the genre are known for their dreamy and vintage aesthetic, with soulful keys/pads and crunchy sounding drums. We focused heavily on that particular vibe that makes timeless sounding music easily achievable for any producer.

Our team created an array of different lofi styles to play with in this pack, leaving you with dream-like sounds to capture the imperfect and timeless aesthetic of the lofi genre.

GEMS VOL. 12 - Trap Melodies
Trap music has always been one of the most popular versions of hip-hop for the last few decades, completely controlling most of the billboard charts! Some of the genre’s most successful producers such as TM88, Metro Boomin, Murda Beatz, etc, have all been known for their game changing sound with futuristic style melodies.

But when it comes to creating your own wave, it can be a little tough finding original melodic ideas for your trap beats...

That’s why our team put together this collection, with a mix of different vibes to choose from, all ready to be paired with hard hitting 808’s and fast paced drums.