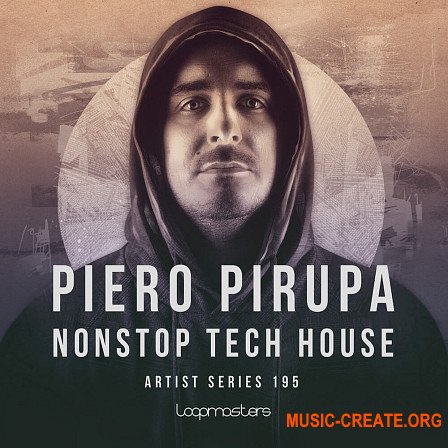 
Loopmasters are proud to present NONSTOP Tech House from industry leader Piero Pirupa! This 100% royalty free collection showcases the key elements of Piero's style in one rock-solid care package, ready to get your next club bangers off the ground with unparalleled ease.

One of Italy's most accomplished exports, Piero Pirupa's stock is one that continues to rise. A champion of groove-laden rhythms and infectious vocal construction, Piero Pirupa's musical stamp falls between House and Tech House fused together with some Deep Tribal and Techno vibes.

Consistently creative in his approach to production, Piero's separation from an over-saturated tech house pool is no coincidence. His 2019 track 'Braindead' dropped on Gorgon City's Realm and immediately hit the #1 spot on Australia's Shazam chart; its subsequent inclusion on Triple J's playlist put Piero on the radar of the majors and led to a four single deal with Island/Universal and forms a clear statement of intent for 2020 and beyond.

Signed to a number of highly respected and acclaimed record labels throughout his career, his curriculum vitae is filled with releases on the likes of Drumcode, Crosstown Rebels, Defected, Toolroom, Relief, Desolat, Intec Digital, Repopulate Mars, Saved, Rebirth and Snatch! Records. He has also appeared on remix duties for such talented names as Claptone, Junior Jack, Sharam and the iconic Jamiroquai for Universal. In addition to his own productions, Piero is recognised as one of the scene's most respected tastemakers and in April 2020, he re-launched NONSTOP - one of the scene's most successful independent labels - with a track called Haus Style.

NONSTEP Tech House draws its name from Piero's much-loved label, representing the sound palette he and his label have become known for. Bouncing kick drums, rolling percussion loops, immersive SFX, deep basslines, snappy snares, shuffling tops, synths and much more are all included and ready to be dropped effortlessly into your DAW. With samples available here in a wide range of keys, tempos and styles, this collection will work best within house, tech house, deep house, tribal house and any other dancefloor styles.