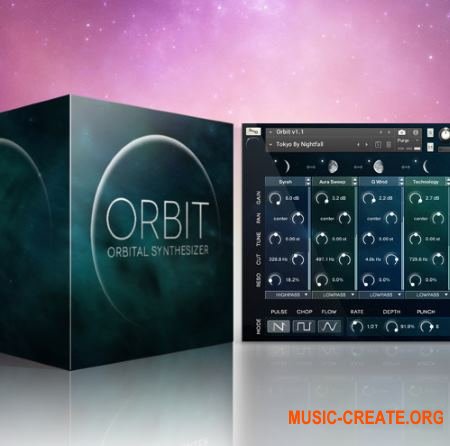 
In this release, ORBIT becomes a Kontakt Player library, gains compatibility with external remotes, and boasts significant new features and workflow enhancements – enabling users to create new, unique sounds faster than ever before.

The core engine behind Orbit consists of four discrete synth channels that constantly cycle (or “orbit” if you prefer) at a user-determined tempo. Each channel contains its own cleanly looped sample, selected from the factory bank of 101 sounds, which are categorized as either Dark, Dreamy, Mysterious, or Aggressive. From there, the sounds are processed via five straightforward parameters: volume, panning, tuning (in semitone increments), filter cutoff frequency, and resonance. As for the filtering parameters, there’s also an option to choose a different filter type for each channel: lowpass, bandpass, highpass, and notch. Each of the channels can be switched off, creating a “rest” in the four-step cycle, and the sounds can be quickly reordered via swap arrows at the top of the channels.

At first glance, this would appear to be a simple four-step sequencer—and in a way, that’s true—but things get more interesting as you manipulate the orbit “mode” tools at the bottom of the screen. Instead of a simple sequence, the system actually selects from three different cross-fade modes. For rhythmic, dance-oriented textures, there are sawtooth and square options that impart a more percussive or chopped character. For sweeping, ethereal soundscapes, the sine wave mode smoothly transitions between each of the channels. In addition to the mode and tempo of the cycling, there are attack and release controls that affect the overall amp envelope. All in all, this is a really clever way to approach morphing and rhythmic textures in a manner that’s reminiscent of digital wave synthesizers such as the Korg Wavestation or Sequential Prophet VS. In fact, it’s almost impossible to get a “bad” sound with an approach that’s so blissfully straightforward.

I was having a blast with the synth engine alone, before I increased the size of Kontakt’s interface and discovered that Orbit also includes integrated effects and additional step sequencers. The selection of processing tools is pretty standard, with two different distortion effects, a chorus/flanger/phaser, delay, reverb, and a final lowpass filter that’s applied at the end of the chain. These all perform as expected, sounding solid as part of any given preset. It’s also worth mentioning that the reverb includes a bunch of really nice convolution options that sound extremely good in the context of the synth’s features. The only caveat is that you can’t change the order of the effects. Fortunately, Orbit’s hardwired series is intelligently organized for all but the most exotic applications.

Adding to Orbit’s morphing capabilities are four independent step sequencers, with up to 16 steps each. You can also change the note value for each sequencer, with longer durations available for subtle, evolving patches. Each sequence can be assigned to a single parameter, with an emphasis on the synth’s global functions like Orbit mode, rate and depth, as well as quite a few of the effects parameters. In addition, each of the sequencers includes a wide array of step processing options, allowing for inversions, randomization, alternating between odd and even, and shifting the entire sequence left or right. What’s more, all four sequences are visible simultaneously (a huge plus) so you can create extremely complex rhythms quickly, thanks to the ability to see each pattern in relationship to the others.

Considering Orbit’s design pedigree, I was expecting a lot from the outset, and it’s a testament to Jeff Rona and Nathan Rightnour’s vast experience that this soft synth lived up to its hype. The first night I installed it, I was lost for hours experimenting with its possibilities, and pretty much everything I tried sounded very polished and professional. For dance music producers, Orbit is capable of some truly impressive rhythmic tricks. For soundtrack composers, it’s a veritable secret weapon for massive sonic soundscapes. If either of those types of music is your specialty, download the demo and get your credit card ready.

PROS Intuitive and approachable interface, regardless of your synthesis experience. Great array of source samples. Four step sequencers can be applied to a wide range of parameters. Integrated effects.

CONS Effects and modulation tools are easy to miss, unless your Kontakt player window is sized correctly. Effects series is hardwired.

A deep source of inspiration and song starters for both dance-oriented rhythmic and soundtrack-oriented atmospheric needs.

Added: ORBIT now runs in the free Kontakt Player! It also now adds to the Kontakt Library tab, and features an easier install. (The factory snapshots folder is now in the main ORBIT folder.)
Added: Assigned NRPNs to most parameters; enables external control from OSC, Lemur, etc.
Added: Input Quantize: Select a quantize value, and notes and chords will always start perfectly in time. Preview exactly what your pulses and chops will sound like, without needing to first record & quantize in your DAW.
Added: Micro-tuning: Holding shift when adjusting an ORBIT’s tuning allows for cent-adjustments.
Added: A new ALL switch that makes CLONE and RANDOM affect the Orbit Parameters as well. This allows for even quicker experimentation!
Added: Several new sequencer processes.
Improved: Naming of some existing sequencer processes.
Improved: Timing of certain sequencer destinations.
Improved: GUI enhancements.
Many small improvements, tweaks and minor bugfixes. Full change list available.

Orbit is available for purchase for $150 USD for a limited time with discount code DEFY_GRAVITY at checkout (MSRP $200 USD). Further discounts are available for students and educators with a valid Student ID.