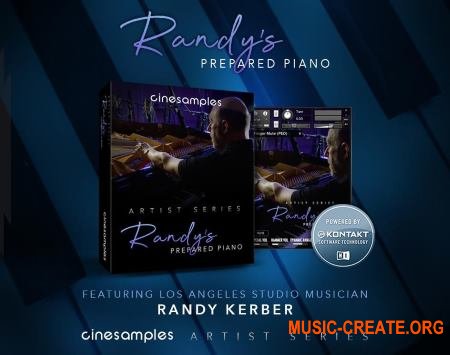 
Several years ago at a recording session at The Bridge, we were recording Nami’s Theme, a spacious piano duet between Randy Kerber (piano, Randy's Celeste), and Amy Tatum (flute). During one of the breaks, Randy started playing with some museum putty inside the piano, giving the instrument a delicate, masked and suggestively underwater tone. It was such a clever and unusual sound that we decided to build an extended piano solo completely out of Randy’s prepared piano techniques in the middle of the duet.

FEATURES
Articulation Selector
On the top-right is a pull-down menu of the various articulations. There are separate Instruments for each articulation as well.

MIXER
There are 5 mix perspectives: Full, Close A, Close B, Close C, and Room. The Full mix is a combination of Close C and the Room. Close A, B, and C are different microphone pairs, each offering a unique texture.

Below each mix, you may advance or delay its sample playback +/- 100ms using a left-to-right slider. Each mix allows for a left-right swap (LR), phase invert (Ø), a stereo widener (select either Haas or Mid/Side), left-right pan, reverb send (PRE- or POST-fader), and gain.

Also included in the mixer is the REVERB type and return and an ATTACK setting to soften the attack of each note rendering a more cinematic sound. Higher ATTACK values will reduce the volume of the sound.

At the top of the mixer, there's a pull-down menu labeled 01 Full Mix. Click on that to select between mix presets. Create your own and save it as an .nki.

The piano recorded at the MGM Scoring Stage has similar and different articulations. Its interface is a scaled down version of the same functions.

CINESINE LITE
CineSine LITE is an additional patch made of a simple sine wave and tuned pink noise. Try adding it to Randy's Prepared Piano and try our MULTIS. It pairs well with the full-range patches giving an added warmth, body, and sustain. You can turn off and on the Sine wave and the Pink noise and change their volumes separately. CineSine LITE offers a standard ADSR envelope, tape saturation, and stereo width (which applies better to the sine wave rather than the pink noise).

Works with the FREE version of Kontakt 5.6.8 and above.