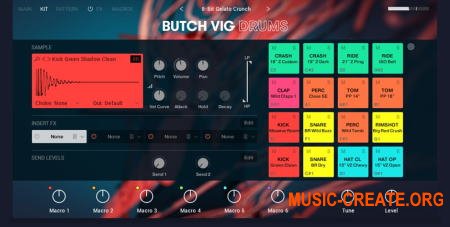 
HARD-HITTING HYBRID DRUMS
•21 individual kits, each with 16 one-shots, created by one of rock music’s most influential producers
•Each kit contains 16 groove patterns that can be edited in any DAW with MIDI drag and drop, plus a wealth of macro effects
•Sleek and simple interface allows for quick and inspiring playability
•Part of the Play Series: Great-sounding presets and real-time control in an intuitive interface

PUNCHY PRODUCTION-READY GROOVES
BUTCH VIG DRUMS comes packed with heavily processed sounds. Created by a true production master, the instrument allows you to lay down heavy rhythms for your tracks, fast. Play beats in live using one of the curated kits, or choose from a selection of built-in MIDI patterns, which you can edit by dragging and dropping into your favourite DAW. Dial in effects to give them even more flavour, for drums that work in a variety of styles.

INSIDE THE RECORDING PROCESS
The drum sounds were recorded at United Recording’s iconic Studio A in Hollywood using a blend of old school studio techniques and new school tweaking. They were then given Butch’s unique processing treatment, running through a bespoke selection of analogue and digital preamps, compressors, stompboxes and more at his home studio ‘GrungeIsDead’.

ABOUT BUTCH
Butch Vig is all at once a musician, a songwriter and a record producer. Best known as the drummer and co-producer of the alternative rock band Garbage and the producer of the seminal albums including Nirvana's "Nevermind", Smashing Pumpkins' "Siamese Dream" and Green Day's "21st Century Breakdown", he is famed for his pioneering approach to producing modern drum sounds.